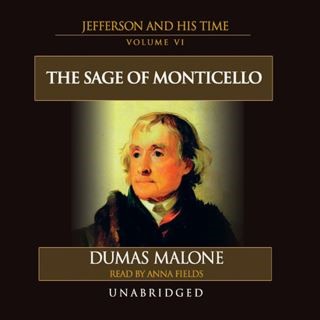 The Sage of Monticello

Jefferson and His Time, Volume 6

The Sage of Monticello is the sixth and final volume of distinguished historian Dumas Malone’s epic masterwork, Jefferson and His Time, a biography begun in 1943 and awarded the Pulitzer Prize in history in 1975. More wide ranging than the preceding volumes, The Sage of Monticello brilliantly recounts the accomplishments, friendships, and family difficulties of Jefferson’s last seventeen years—including his retirement from the presidency, his correspondence with John Adams and James Madison, his personal tribulations and debt, and his major role in the founding of the Library of Congress and the University of Virginia. Revealing Jefferson’s shift from the realm of politics to his roles as family man, architect, and educational enthusiast, this is a fitting final chapter in the life of one of America’s greatest men.

Dumas Malone (1892–1986) taught history at American universities such as Yale and Columbia and served for seven years as director of the Harvard University Press before becoming the biographer-in-residence at the University of Virginia. His work as historian and biographer has earned him several honors, including the Pulitzer Prize, the Thomas Jefferson Award, the John F. Kennedy Medal, and the Presidential Medal of Freedom.

Anna Fields (1965-2006), winner of more than a dozen Earphones Awards and the prestigious Audie Award in 2004, was one of the most respected narrators in the industry. Trained at the Actors Theatre of Louisville, she was also a director, producer, and technician at her own studio, Cedar House Audio.