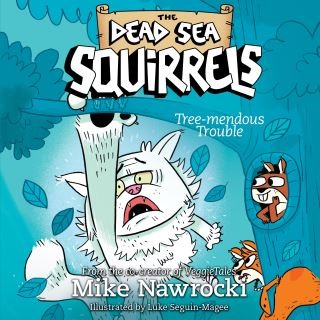 Mike Nawrocki, co-creator of VeggieTales, is back with more adventures with Michael and his friends!

Fancy costumes, an upgraded hamster house, and a dinner invitation? Sounds like Merle and Pearl are really coming up in the world now that they’re settling into the 21st century. But maybe this invitation to share acorns with new friends isn’t all it’s cracked up to be. It’s another hilarious adventure with Merle and Pearl as they learn that kindness counts, even when you’re facing your biggest (and fluffiest) nemesis.

Mike Nawrocki: As co-creator of VeggieTales, co-founder of Big Idea Entertainment, and the voice of the beloved Larry the Cucumber, Mike Nawrocki has been dedicated to helping parents pass on biblical values to their kids through storytelling for over two decades. Mike currently serves as Assistant Professor of Film and Animation at Lipscomb University in Nashville, Tennesee, and makes his home in nearby Franklin with his wife, Lisa, and their two children. The Dead Sea Squirrels is Mike’s first children’s book series.