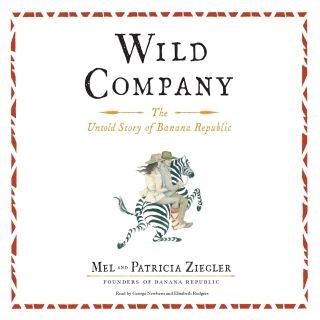 The Untold Story of Banana Republic

With $1,500 and no business experience, Mel and Patricia Ziegler turned a wild idea into a company that would become the international retail colossus Banana Republic. Reimagining military surplus as safari and expedition wear, the former journalist and artist created a world that captured the zeitgeist for a generation and spoke to the creativity, adventure, and independence in everyone.

In a book that’s honest, funny, and charming, Mel and Patricia tell in alternating voices how they upended business conventions and survived on their wits and imagination. Many retail and fashion merchants still consider Banana Republic’s early heyday to be one of the most remarkable stories in fashion and business history. The couple detail how, as “professional amateurs,” they developed the wildly original merchandise and marketing innovations that broke all retail records and produced what has been acclaimed by industry professionals to be “the best catalog of all time.”

A love story wrapped in a business adventure, Wild Company is a soulful, inspiring tale for listeners determined to create their own destiny with a passion for life, work, and fun.

Mel and Patricia Ziegler are the founders of Banana Republic and the Republic of Tea. They live outside of San Francisco.

Patricia Ziegler is a founder of Banana Republic and the Republic of Tea. She lives outside of San Francisco.

Patricia Ziegler is a founder of Banana Republic and the Republic of Tea. She lives outside of San Francisco.

George Newbern is an Earphones Award-winning narrator and a television and film actor best known for his roles as Brian MacKenzie in Father of the Bride and Father of the Bride Part II, as well as Danny in Friends. As a voice actor, he is notable for his role as Superman on the Cartoon Newtork series Static Shock, Justice League, and Justice League Unlimited. He has guest starred on many television series, including Scandal, The Mentalist, Private Practice, CSI: Miami, and Numb3rs. He holds a BA in theater arts from Northwestern University.

Elisabeth Rodgers is an actress and AudioFile Earphones Award-winning audiobook narrator. After graduating from Princeton University, she completed a two-year program at William Esper Studio, where she studied with Maggie Flanigan. Her audiobook narration training came from Robin Miles, who has also directed her in several productions. She has recorded dozens of books for a multitude of publishers.