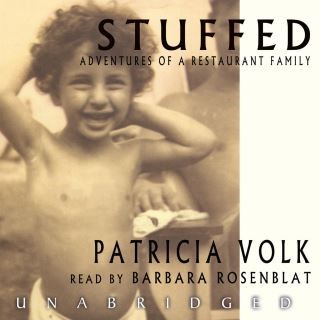 Adventures of a Restaurant Family

Volk's family fed New York City for one hundred years, from 1888 when her great-grandfather introduced pastrami to America until 1988, when her father closed his garment center restaurant. All along, food was pretty much at the center of their lives. But as seductively as Volk evokes the food, Stuffed is at heart a paean to her quirky, vibrant relatives: her grandmother with the "best legs in Atlantic City"; her grandfather, who invented the wrecking ball; her larger-than-life father, who sculpted snow thrones when other dads were struggling with snowmen. Writing with great freshness and humor, Patricia Volk will leave you hungering to sit down to dinner with her robust family—both for the spectacle and for the food.

Patricia Volk is the author of the memoir Stuffed: Adventures of a Restaurant Family and four works of fiction. A recipient of a Guggenheim Fellowship, she has written for the New York Times, the Atlantic, the New Yorker, and Playboy. She lives in New York City.

Barbara Rosenblat, one of the most awarded narrators in the business, was selected by AudioFile magazine as one of the Golden Voices of the Twentieth Century. She has received the prestigious Audie Award multiple times and has earned fifty-four AudioFile Earphones Awards. She has also appeared in film, television, and theater, both in London's West End and on Broadway.