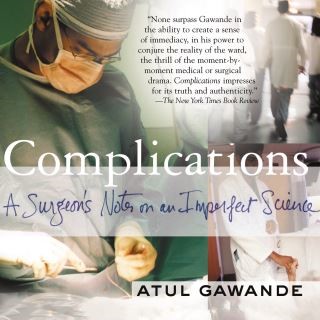 A Surgeon's Notes on an Imperfect Science

A brilliant and courageous doctor reveals, in gripping accounts of true cases, the power and limits of modern medicine.

Sometimes in medicine the only way to know what is truly going on in a patient is to operate, to look inside with one's own eyes. This audio is exploratory surgery on medicine itself, laying bare a science not in its idealized form but as it actually is -- complicated, perplexing, and profoundly human.

Atul Gawande offers an unflinching view from the scalpel's edge, where science is ambiguous, information is limited, the stakes are high, yet decisions must be made. In dramatic and revealing stories of patients and doctors, he explores how deadly mistakes occur and why good surgeons go bad. He also shows us what happens when medicine comes up against the inexplicable: an architect with incapacitating back pain for which there is no physical cause; a young woman with nausea that won't go away; a television newscaster whose blushing is so severe that she cannot do her job. Gawande offers a richly detailed portrait of the people and the science, even as he tackles the paradoxes and imperfections inherent in caring for human lives.

At once tough-minded and humane, Complications is a new kind of medical writing, nuanced and lucid, unafraid to confront the conflicts and uncertainties that lie at the heart of modern medicine, yet always alive to the possibilities of wisdom in this extraordinary endeavor.

Complications is a 2002 National Book Award Finalist for Nonfiction.

Atul Gawande: Atul Gawande is the author of four bestselling books: Complications, a finalist for the National Book Award; Better; The Checklist Manifesto, and Being Mortal. He is also a surgeon at Brigham and Women's Hospital in Boston, a staff writer for The New Yorker, and a professor at Harvard Medical School and the Harvard School of Public Health. He has won the Lewis Thomas Prize for Writing about Science, a MacArthur Fellowship, and two National Magazine Awards. In his work in public health, he is Founder and Chair of Ariadne Labs, a joint center for health systems innovation, and Lifebox, a nonprofit organization making surgery safer globally. He is also chair of Haven, where he was CEO from 2018-2020. He and his wife have three children and live in Newton, Massachusetts.William David Griffith narrated Atul Gawande's Complications, which won an AudioFile Earphones award, as well as Sidney Kirkpatrick's Edgar Cayce and Douglas Rushkoff's Coercion.  Of Griffith’s performance in Complications, AudioFile magazine said, "The sea of scientific and medical terms poses no problem for the charming and animated William David Griffith, who is a skilled complement to an audiobook not to be missed by general readers interested in medicine."