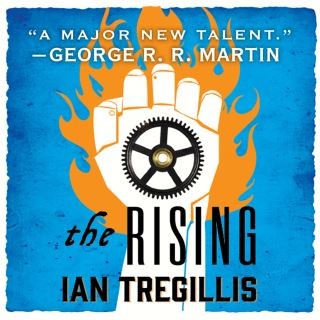 The second book in the Alchemy Wars trilogy by Ian Tregillis, an epic tale of liberation and war.

Jax, a rogue Clakker, has wreaked havoc upon the Clockmakers' Guild by destroying the Grand Forge. Reborn in the flames, he must begin his life as a free Clakker, but liberation proves its own burden.

Berenice, formerly the legendary spymaster of New France, mastermind behind her nation's attempts to undermine the Dutch Hegemony -- has been banished from her homeland and captured by the Clockmakers Guild's draconian secret police force.

Meanwhile, Captain Hugo Longchamp is faced with rallying the beleaguered and untested defenders of Marseilles-in-the-West for the inevitable onslaught from the Brasswork Throne and its army of mechanical soldiers.

Ian Tregillis: Ian Tregillis is the son of a bearded mountebank and a discredited tarot card reader. He was born and raised in Minnesota, where his parents had landed after fleeing the wrath of a Flemish prince. (The full story, he's told, involves a Dutch tramp steamer and a stolen horse.) Nowadays he lives in New Mexico, where he consorts with writers, scientists and other unsavoury types.