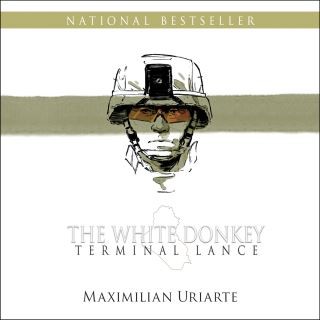 A New York Times bestseller: A graphic novel of war and its aftermath.

A powerful, compulsively page-turning, vivid, and moving tribute to the experience of war and PTSD, The White Donkey tells the story of Abe, a young Marine recruit who experiences the ugly, pedestrian, and often meaningless side of military service in rural Iraq. He enlists in hopes of finding that missing something in his life but comes to find out that it's not quite what he expected.

Abe gets more than he bargained for when his journey takes him to the middle east in war-torn Iraq. This is a story about a Marine, written and illustrated by a Marine, and is the first graphic novel about the war in Iraq from a veteran. The White Donkey explores the experience of being a Marine, as well as the challenges that veterans face upon their return home, and its raw power will leave you in awe.

Maximilian Uriarte:
Infantry Marine and Iraq veteran Maximilian Uriarte is the creator of the hit comic strip "Terminal Lance." Uriarte enlisted in the United States Marine Corps in 2006 at the age of 19 and served for four years. During his first deployment to Iraq in 2007 he served as an MRAP turret gunner and dismount of India Company's "Jump" platoon in the Zaidon region southeast of Fallujah. He deployed to Iraq again in 2009 as a billeted Combat Photographer and Combat Artist, then enrolling in California College of the Arts. He is the author of The Terminal Lance Ultimate Omnibus, White Donkey, and Battle Born.