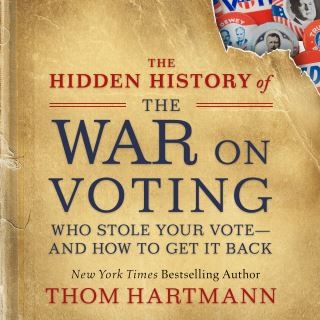 The Hidden History of the War on Voting

Who Stole Your Vote—and How to Get It Back

In today's America, only a slim majority of people register to vote, and a large percentage of registered voters don't bother to show up: Donald Trump was elected by only 26 percent of eligible voters. Unfortunately, this is not a bug in our system, it's a feature. Thom Hartmann unveils the strategies and tactics that conservative elites in this country have used, from the foundation of the Electoral College to the latest voter ID laws, to protect their interests by preventing “the wrong people”—such as the poor, women, and people of color—from voting while making it more convenient for the wealthy and white. But he also lays out a wide variety of simple, commonsense ways that we the people can fight back and reclaim our right to rule through the ballot box.

Thom Hartmann: Thom Hartmann is a progressive national and internationally syndicated talk show host. Talkers Magazine named him America's #1 most important progressive host and the host of one of the top 10 talk radio shows in the country every year for over a decade. A four-time recipient of the Project Censored Award, Hartmann is also a New York Times bestselling author of thirty-two books, translated into multiple languages.