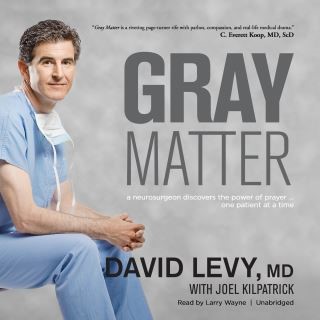 A perfect blend of medical drama and spiritual insight, Gray Matter is a fascinating account of Dr. David Levy’s decision to begin asking his patients if he could pray for them before surgery. Some are thrilled. Some are skeptical. Some are hostile, and some are quite literally transformed by the request.

Each chapter focuses on a specific case, opening with a detailed description of the patient’s diagnosis and the procedure that will need to be performed, followed by the prayer request. From there, listeners follow as Dr. Levy performs the operation, and then we wait—right alongside Dr. Levy, the patients, and their families—to see the final results.

Dr. Levy’s musings on what successful and unsuccessful surgical results imply about God, faith, and the power of prayer are honest and insightful. As we see him come to his ultimate conclusion that, no matter what the results of the procedure are, “God is good,” we cannot help but be truly moved and inspired.

David I. Levy, MD, practices neurosurgery in San Diego, California. His articles have been published in a variety of neurosurgical journals, and he is an accomplished and engaging speaker and presenter. In his off time, David enjoys helping those less fortunate who live in California and in other parts of the world.

Joel Kilpatrick is an award-winning journalist and author whose work has been featured in Time magazine, the Washington Post, USA Today, CBS Radio, the Dallas Morning News and dozens of newspapers and magazines. He has authored and ghostwritten more than 40 books, including a New York Times bestseller. He has reported from disaster zones and civil wars in seventeen countries, and received numerous prizes for writing and reporting.

Kilpatrick founded LarkNews.com, the world’s leading religion satire website which won the Dove award for humor (officially the Grady Nutt Humor Award) from the Gospel Music Association in 2005. He has won numerous awards for humor and reporting from the Evangelical Press Association. He was profiled in Time magazine, Christianity Today and on NPR, and has been featured twice in USA Today. LarkNews enjoys millions of visitors. Kilpatrick earned an MS degree in journalism from Columbia University Graduate School of Journalism in New York in 1995. He lives in southern California with his wife and five children.

Joel Kilpatrick is an award-winning reporter and creator of LarkNews.com, the world's leading Christian satire website, which received the 2005 Gospel Music Association's Grady Nutt Humor Award. His work has been featured in Time, the Washington Post, the Dallas Morning News, and on CBS Radio. He earned an MS degree in journalism from Columbia University Graduate School of Journalism in New York in 1995

Larry Wayne has been talking for a living for most of his life: over three decades in radio, with seventeen years with the K-LOVE network, all the while doing freelance voice projects through his professional home studio. He also has over twenty audiobooks to his credit. After surrendering his life to Christ, he married Dean (who told him about the Lord) thirty-five years ago. They have three adult children and seven grandkids.