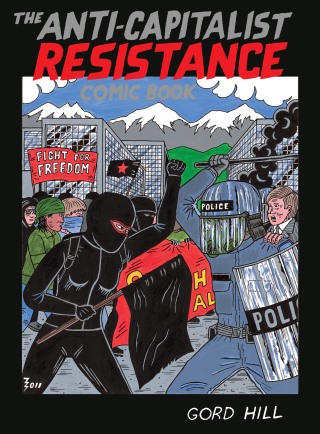 In recent years the world has borne witness to numerous confrontations, many of them violent, between protesters and authorities at pivotal gatherings of the world’s political and economic leaders. While police and the media are quick to paint participants as anarchistic thugs, accurate accounts of their ubsequent treatment at the hands of authorities often go untold—as well as the myriad stories of corporate and government corruption, greed, exploitation, and abuse of power that inspired such protests in the first place. In this startling, politically astute graphic novel, Gord Hill (The 500 Years of Resistance Comic Book) documents the history of capitalism as well as anti-capitalist and anti-globalization movements around the world, from the 1999 “Battle of Seattle” against the World Trade Organization to the Toronto G20 summit in 2010. The dramatic accounts trace the global origins of public protests against those in power, then depict recent events based on eyewitness testimony; they go far to contradict the myths of violence perpetrated by authorities, and instead paint a vivid and historically accurate picture of activists who bring the crimes of governments and multinationals to the world’s attention.

As the “Occupy” movements around the world unfold, The Anti-Capitalist Resistance Comic Book is a deft, eye-opening look at the new class warfare, and those brave enough to wage the battle.

Gord Hill is an artist and activist, and a member of the Kwakwaka'wakw nation whose territory is located on northern Vancouver Island and adjacent mainland in the province of “British Columbia.” He is also descended from Scottish and Tlingit great grandparents. He has been involved in the Indigenous people’s and anti-globalization movements since 1990.