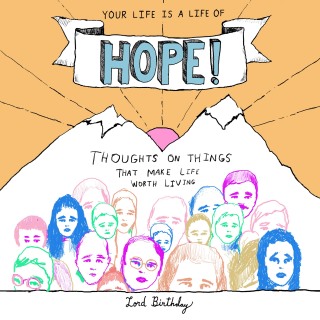 Your Life Is a Life of Hope!

Thoughts on Things That Make Life Worth Living

What makes life worth living? If you ask Lord Birthday, the answer is visor hats. And lighthouses. And the stranger who gave him a half-eaten panini on the bus the other day.

In Your Life Is a Life of Hope!, the Internet’s favorite mustachioed king presents a series of short, illustrated essays in which he argues for hope by way of absurdity and transcendence by way of the mundane. In his signature childlike, dryly humorous style, Lord Birthday explores the things that make life so great, including jackets and bags and “booping someone on the nose.” Both strange and strangely moving, this collection will delight fans and newcomers alike.

Lord Birthday: Chad Murphy is a father, college professor, failed baseball person, and former Mormon. He created Lord Birthday in 2015 as an anonymous outlet for his newly discovered absurdist streak. His unconventional biography was featured on NPR’s Invisibilia in 2017. Lord Birthday quickly gained traction on social media, leading him to focus on list-based comics, and now, short-short essays. His first book, How to Appear Normal at Social Events, was published in March 2018.