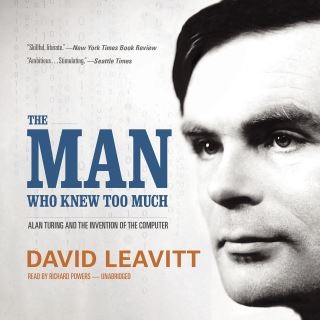 The Man Who Knew Too Much

Alan Turing and the Invention of the Computer

To solve one of the great mathematical problems of his day, Alan Turing proposed an imaginary computer. Then, attempting to break a Nazi code during World War II, he successfully designed and built one, thus ensuring the Allied victory. Turing became a champion of artificial intelligence, but his work was cut short. As an openly gay man at a time when homosexuality was illegal in England, he was convicted and forced to undergo a humiliating "treatment" that may have led to his suicide.

With a novelist's sensitivity, David Leavitt portrays Turing in all his humanity—his eccentricities, his brilliance, his fatal candor—and elegantly explains his work and its implications.

David Leavitt’s many books include the story collection Family Dancing, a finalist for the PEN/Faulkner Award and the National Book Critics Circle Award, and the novels The Lost Language of Cranes, While England Sleeps, The Body of Jonah Boyd, and The Indian Clerk, a finalist for the PEN/Faulkner Award and short-listed for the IMPAC Dublin Literary Award. Leavitt is also the author of the nonfiction works The Man Who Knew Too Much: Alan Turing and the Invention of the Computer and Florence, A Delicate Case. His writing has appeared in the New Yorker, the New York Times, the Washington Post, Harper’s, Vogue, and the Paris Review. He lives in Gainesville, Florida, where he is professor of English at the University of Florida and edits the literary magazine Subtropics.