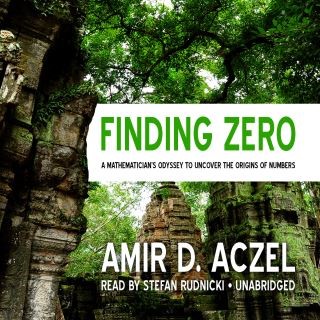 A Mathematician’s Odyssey to Uncover the Origins of Numbers

The invention of numerals is perhaps the greatest abstraction the human mind has ever created. Virtually everything in our lives is digital, numerical, or quantified. The story of how and where we got these numerals, which we so depend on, has for thousands of years been shrouded in mystery. Finding Zero is an adventure-filled saga of Amir Aczel's lifelong obsession: to find the original sources of our numerals. Aczel has doggedly crisscrossed the ancient world, scouring dusty, moldy texts, cross examining so-called scholars who offered wildly differing sets of facts, and ultimately penetrating deep into a Cambodian jungle to find a definitive proof. Here, he takes the reader along for the ride.

The history begins with the early Babylonian cuneiform numbers, followed by the later Greek and Roman letter numerals. Then Aczel asks the key question: where do the numbers we use today, the so-called Hindu-Arabic numerals, come from? It is this search that leads him to explore uncharted territory, to go on a grand quest into India, Thailand, Laos, Vietnam, and ultimately into the wilds of Cambodia. There he is blown away to find the earliest zero—the keystone of our entire system of numbers—on a crumbling, vine-covered wall of a seventh-century temple adorned with eaten-away erotic sculptures. While on this odyssey, Aczel meets a host of fascinating characters: academics in search of truth, jungle trekkers looking for adventure, surprisingly honest politicians, shameless smugglers, and treacherous archaeological thieves—who finally reveal where our numbers come from.

Amir D. Aczel: Amir D. Aczel is the author of many research articles on mathematics, two textbooks, and nine nonfiction books, including the international bestseller Fermat's Last Theorem, which was nominated for a Los Angeles Times Book Award. Aczel has appeared on over thirty television programs, including nationwide appearances on CNN, CNBC, and Nightline, and on over a hundred radio programs, including NPR's Weekend Edition and Morning Edition. Aczel is a Fellow of the John Simon Guggenheim Memorial Foundation.