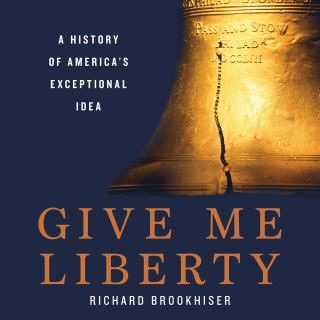 A History of America's Exceptional Idea

An award-winning historian recounts the history of American liberty through the stories of thirteen essential documents
Nationalism is inevitable: It supplies feelings of belonging, identity, and recognition. It binds us to our neighbors and tells us who we are. But increasingly -- from the United States to India, from Russia to Burma -- nationalism is being invoked for unworthy ends: to disdain minorities or to support despots. As a result, nationalism has become to many a dirty word.
In Give Me Liberty, award-winning historian and biographer Richard Brookhiser offers up a truer and more inspiring story of American nationalism as it has evolved over four hundred years. He examines America's history through thirteen documents that made the United States a new country in a new world: a free country. We are what we are because of them; we stay true to what we are by staying true to them.
Americans have always sought liberty, asked for it, fought for it; every victory has been the fulfillment of old hopes and promises. This is our nationalism, and we should be proud of it.

Richard Brookhiser:
Richard Brookhiser is a senior editor of National Review and the author of thirteen books, including John Marshall: The Man Who Made the Supreme Court, Founders' Son: A Life of Abraham Lincoln, and James Madison. He lives in New York City.