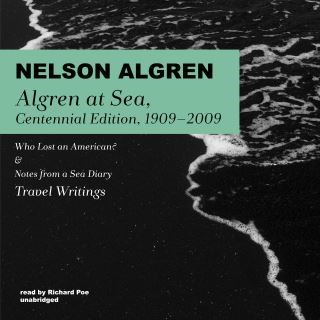 Who Lost an American? & Notes from a Sea Diary; Travel Writings

Nelson Algren’s two travel writing books describe his journeys through the seamier sides of great American cities and the international social and political landscapes of the mid-1960s. Algren at Sea brings them together in one volume.

Notes from a Sea Diary offers one of the most remarkable appraisals of Ernest Hemingway ever written. Aboard the freighter Malaysia Mail, Algren ponders his personal encounter with Hemingway in Cuba and the values inherent in Hemingway’s stories as he visits the ports of Pusan, Kowloon, Bombay, and Calcutta.

Who Lost an American? is a whirlwind spin through Paris and Playboy clubs, New York publishing and Dublin pubs, Crete and Chicago, as Algren adventures with Simone de Beauvoir, Jean-Paul Sartre, Brendan Behan, and Juliette Gréco.

Nelson Algren (1909–1981), now considered one of America’s finest novelists, was born in Detroit and lived most of his life in Chicago. His jobs included migrant worker, journalist, and medical worker. He is the author of five novels, including The Man with the Golden Arm, which was the winner of the first National Book Award.