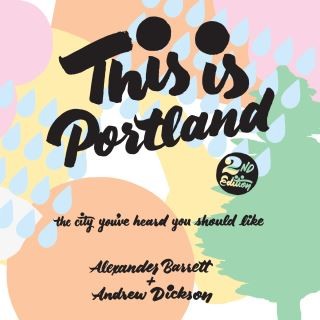 This Is Portland, 2nd Edition

A first-hand look at a city that people can’t seem to stop talking about. It’s a guidebook of sorts, but not to restaurants and sightseeing. Instead, Alexander Barrett is your friendly guide to the quirky characters and atmosphere of Portland, Oregon, and how fun, beautiful, and ridiculous it can be. With its approachable, often hilarious tone, this book is perfect for anyone who wants to learn more about bikes, beards, beers, rain, and everything else important about the city you’ve heard you should like. The expanded second edition of this popular book is sure to delight!

Alexander Barrett is a writer and illustrator who is constantly baffled by the human experience. From his home in Shanghai, China, he uses ink and words to try to make sense of it all. He is rarely successful, but his work has appeared all over the internet, the streets, and the TVs of North America and Asia.

Andrew Dickson is a freelance copywriter and director as well as a performer and public speaker based in Portland, Oregon.

He primarily works with advertising agencies and companies as some combination of a copywriter, creative director, creative consultant, or commercial director. More about that below.

He also hosts storytelling events for The Moth, and is a regular emcee and auctioneer for non-profit galas, award shows, political rallies, and public schools looking to raise money to hire an extra teacher. He loves being on stage and especially enjoys facilitating, be it to raise money, build awareness, or simply to make sure everyone else on stage is being heard. No matter the event, he makes sure everyone in the audience is having a great time.

Additionally, he’s a SAG actor and voice-over, ran WK12 for 3 years and has taught and mentored at the college and graduate level, was an internationally touring performance artist, and is kind of sort of a life coach.