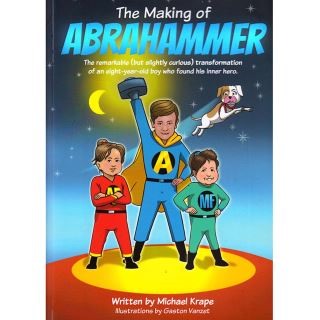 Abraham Tisdale was a normal eight-year-old kid who did his best to avoid the school bully. He was pretty successful until one day he was cornered, with nowhere to hide. Then something remarkable happened, transforming him into one of the world's greatest superheroes - Abrahammer.
Joined by his loyal team, Ari Ferrari, Maisie Fantazie and American Bulldog cross, Nail, Abrahammer sets out to track down and confront the bully, Dim Dribblechin. But will Nail overcome her fear of heights and take to the sky? Will Ari Ferrari and Maisie Fantazie need their super-nappies changed as often as their normal nappies? And will Abrahammer's true identity be revealed before Dim Dribblechin and his accomplices, Conchita Smellyfeeta and Wilson Wobblebottom are behind bars?
The Making of Abrahammer examines the very serious issue of bullying, and explains why kids deserve to be empowered, especially when they're at their most vulnerable.