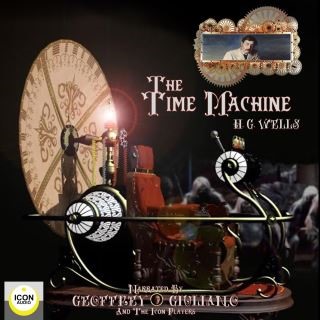 The Time Machine is a science fiction novella by H. G. Wells, published in 1895 and written as a frame narrative. The work is generally credited with the popularization of the concept of time travel by using a vehicle or device to travel purposely and selectively forward or backward through time. The term "time machine", coined by Wells, is now almost universally used to refer to such a vehicle or device.
The work has been adapted into three feature films of the same name, as well as two television versions and many comic book adaptations. It has also indirectly inspired many more works of fiction in many media productions.
Produced by Devin Lawrence
Edited by Macc Kay
Production executive Avalon Giuliano
ICON Intern Eden Giuliano
Music By AudioNautix With Their Kind Permission
©2020 Eden Garret Giuliano (P) Eden Garret Giuliano
Geoffrey Giuliano is the author of over thirty internationally bestselling biographies, including the London Sunday Times bestseller Blackbird: The Life and Times of Paul McCartney and Dark Horse: The Private Life of George Harrison. He can be heard on the Westwood One Radio Network and has written and produced over seven hundred original spoken-word albums and video documentaries on various aspects of popular culture. He is also a well known movie actor.