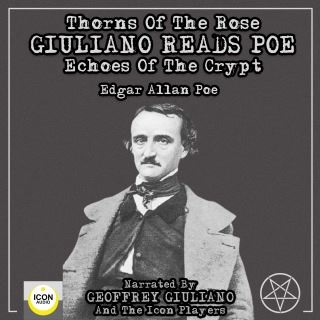 Thorns Of The Rose - Giuliano Reads Poe Echoes Of The Crypt

Poe’s stature as a major figure in world literature is based on his ingenious and profound poems, which established a highly influential rationale for the short form in poetry. Poe was also the principal forerunner of the “art for art’s sake” movement in 19th-century literature. He demonstrated a brilliant command of language and technique as well as an inspired and original imagination. Poe’s poetry greatly influenced the French Symbolists of the late 19th century, who in turn altered the direction of modern literature. Here, perhaps, is his most icon lauded work as interpreted by veteran actor Giuliano. They include:
The Raven
City in The Sea Edgar
Alone
Dream Within A Dream
The Haunted Palace
The Valley of Unres
Produced by Devin Lawerence
Edited by Macc Kay
Production executive Avalon Giuliano
ICON Intern Eden Giuliano
Recorded in Jaipur, India and Bangkok, Thailand
Music By AudioNautix With Their Kind Permission
©2020 Eden Garret Giuliano (P) Eden Garret Giuliano
Geoffrey is the author of over thirty internationally bestselling biographies, including the London Sunday Times bestseller Blackbird: The Life and Times of Paul McCartney and Dark Horse: The Private Life of George Harrison. He can be heard on the Westwood One Radio Network and has written and produced over seven hundred original spoken-word albums and video documentaries on various aspects of popular culture. He is also a well known movie actor.