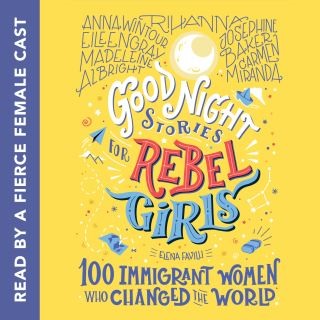 A continuation of the New York Times bestselling series, Good Night Stories for Rebel Girls: 100 Immigrant Women Who Changed the World is packed with 100 bedtime stories about the lives of 100 extraordinary women from the past and the present. This volume recognizes women who leave their homeland to seek refuge, to realize their dreams, and to share their invaluable contributions with the world.

The latest installment in the New York Times bestselling Good Night Stories for Rebel Girls series, featuring 100 immigrant women who have shaped, and will continue to shape, our world.

Good Night Stories for Rebel Girls: 100 Immigrant Women Who Changed the World is the third book in the New York Times bestselling series for children. Packed with 100 all-new bedtime stories about the lives of incredible female figures from the past and the present, this volume recognizes women who left their birth countries for a multitude of reasons: some for new opportunities, some out of necessity. Readers will whip up a plate with Asma Khan, strategize global affairs alongside Madeleine Albright, venture into business with Rihanna, and many more.

This audiobook includes a PDF of two written exercises--"Write Your Story" & "Draw Your Portrait"--and the "Glossary" from the book.

Elena Favilli: Elena Favilli is the co-founder and CEO of Rebel Girls, the cultural media engine working to empower girls
and women all over the world. She has worked for Colors Magazine, McSweeney's, RAI, Il Post, and La Repubblica, and managed digital newsrooms on both sides of the Atlantic. She holds a masters degree in semiotics from the University of Bologna and she studied digital journalism at UC Berkeley. Growing up in a small village in Tuscany, Elena was the only kid in town and drew inspiration from the strong women in her family. Fueled by her interest in stories, she continued on as a journalist in Milan, where she co-created Timbuktu Magazine, the first ever iPad
magazine for children. After Timbuktu Magazine was picked up by 500 Startups in 2012, Elena chased its success to build a company in California. In 2015, testing out a new idea to provide even greater access to female role models, Good Night Stories for Rebel Girls was born. Elena and her co-founder's Kickstarter campaign was an instant triumph, and the book went on to become the most crowdfunded book initiative in history. Elena continues to spearhead Rebel Girls, as it dives into new mission-driven initiatives and projects. She lives in Los Angeles with her dog Lafayette, a Bracco Italiano.