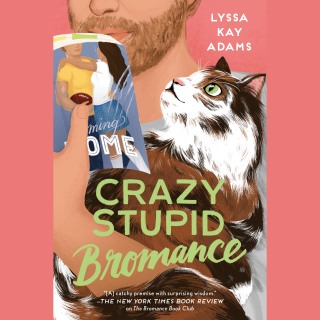 A LibraryReads Hall of Fame Title

A hacktivist and a cat café owner decode the friend zone in this romantic comedy from the author of Undercover Bromance.

Alexis Carlisle and her cat café, ToeBeans, have shot to fame after she came forward as a victim of a celebrity chef’s sexual harassment. When a new customer approaches to confide in her, the last thing Alexis expects is for the woman to claim they’re sisters. Unsure what to do, Alexis turns to the only man she trusts—her best friend, Noah Logan.

Computer genius Noah left his rebellious teenage hacker past behind to become a computer security expert. Now he only uses his old skills for the right cause. But Noah’s got a secret: He’s madly in love with Alexis. When she asks for his help, he wonders if the timing will ever be right to confess his crush.

Noah’s pals in The Bromance Book Club are more than willing to share their beloved “manuals” to help him go from bud to boyfriend. But he must decide if telling the truth is worth risking the best friendship he’s ever had.

Lyssa Kay Adams: After a nearly 20-year career as a journalist, Lyssa Kay Adams's dreams of writing and publishing her own HEAs came true in 2015 with the release of her first novel. Today, she writes full-time from her home in Michigan with a pesky, fluffy K9 assistant named Domino who spends most of his day snoring on her desk (that is, when he's not burying things around the house).