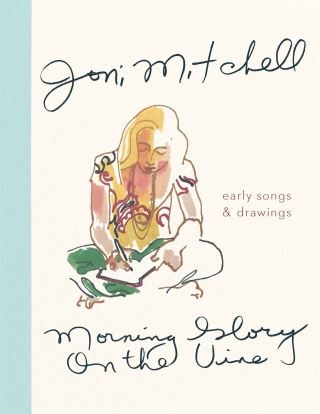 Morning Glory on the Vine

'Glorious' Guardian 'Revelatory' New Yorker 'Evocative' Los Angeles Times In 1971, as her groundbreaking album Blue emerged as a singular commercial and critical success around the world, Joni Mitchell puzzled over what gift to give her friends that Christmas. The result was a handmade book, with only one hundred copies produced, filled with Joni’s hand-written lyrics and reproductions of many of her stunning drawings — portraits, abstracts, random concertgoers, and more. Each was given to a friend and, until now, the edition has remained private. Today, with Morning Glory on the Vine, Joni’s long-ago personal Christmas present is a present to us all.

Joni Mitchell: Joni Mitchell is a Canadian singer-songwriter whose songs have helped define an era and a generation. She has received many accolades, including nine Grammy Awards, and has released 19 studio albums, including Blue in 1971. Mitchell, with roots in visual art, has designed most of her own album covers. Among her numerous honours, she was awarded a Grammy Lifetime Achievement Award in 2002 and was inducted into the Canadian Songwriters Hall of Fame in 2007.