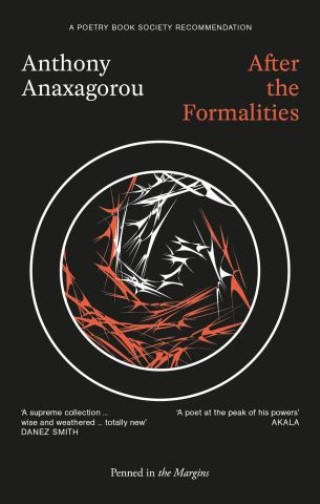 A knife is pulled. An Uber driver is racially abused on the day of the Brexit referendum. A father bathes his son in ice water. A schoolboy drives a drawing pin into a map of the world. The threat of violence is never far away in Anthony Anaxagorou's breakthrough collection After the Formalities. Technically achieved, emotionally transformative and razor-sharp, these are poems that confront and contradict; poems in which the scholarly synthesises with the streetwise, and global histories are told through the lens of one family. Anaxagorou 'speaks against the darkness', tracking the male body under pressure from political and historical forces, and celebrates the precarious joy of parenthood. The title poem is a meditation on racism and race science that draws on the poet's Cypriot heritage and is as uncomfortable as it is virtuosic. Elsewhere, in a sequence of prose poems that shimmer with lyric grace, he writes, 'I'm your father & the only person keeping you alive.'