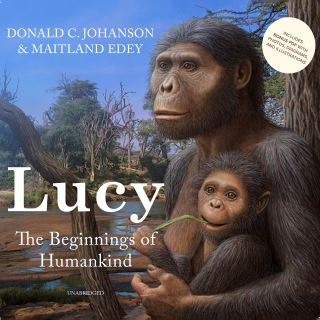 The Beginnings of Humankind

The story of the discovery of “Lucy”—the oldest, best-preserved skeleton of any erect-walking human ancestor ever found.

When Donald Johanson found a partial skeleton, approximately 3.5 million years old, in a remote region of Ethiopia in 1974, a headline-making controversy was launched that continues today. Bursting with all the suspense and intrigue of a fast-paced adventure novel, here is Johanson’s lively account of the extraordinary discovery of “Lucy.”

By expounding the controversial change Lucy makes in our view of human origins, Johanson provides a vivid, behind-the-scenes account of the history of paleoanthropology and the colorful, eccentric characters who were and are a part of it. Never before have the mystery and intricacy of our origins been so clearly and compellingly explained as in this astonishing and dramatic book.

Donald Johanson discovered the famous 3.2 million-year-old skeleton named Lucy in 1974 in a remote region of Ethiopia known as Hadar and, with a team of investigators, revised society’s understanding of human evolution. Although dozens of other significant hominid fossils of all ages have been found, Lucy (Australopithecus afarensis) continues to be the benchmark to which all discoveries are compared. He is the author of several popular books, including Lucy: The Beginnings of Humankind (with Maitland Edey), which won the 1981 American Book Award in Science, and has written or contributed to hundreds of articles. He is a distinguished member of the Siena Academy of Sciences in Italy and a fellow of the Royal Geographical Society. His numerous honors include medals from the Explorers Club and the California Academy of Sciences. He established the renowned Laboratory of Physical Anthropology at the Cleveland Museum of Natural History and the Institute of Human Origins, based at Arizona State University, where he serves as the Virginia M. Ullman Chair in Human Origins.

Maitland Edey (1910–1992) was awarded (with Donald C. Johanson) the National Book Award in Science for Lucy: The Beginnings of Mankind. His other works include Blueprints: Solving the Mystery of Evolution.