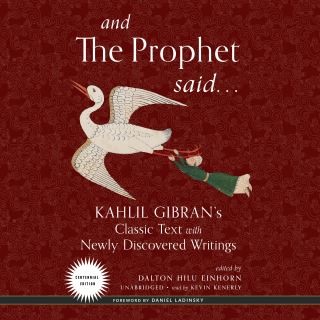 And the Prophet Said

And the Prophet Said is a new, complete edition of Kahlil Gibran’s classic text with more than 150 unpublished poems, aphorisms, and epigrams.

Originally published in 1923, The Prophet is a teaching fable that has been cherished by millions for nearly one hundred years. It is a book of wisdom that provides guidance for readers on how to live a life imbued with meaning and purpose. Gibran explores all of life’s important issues, including love, marriage, the human condition, friendship, prayer, beauty, death, and much more.

What makes this edition especially exciting is the inclusion of newly discovered Gibran material. In 2017, Dalton Hilu Einhorn gained access to the Gibran/Haskell archives at the University of North Carolina. Buried among this treasure trove of papers, he came upon little-known Gibran writings, published here for the first time.

Here is classic Gibran wisdom and inspiration that leads readers to contemplate love, beauty, mortality, and meaning. The words have an immediacy and depth that will appeal to the millions who have read The Prophet.

Kahlil Gibran (1883–1931), an artist, poet, and writer, was born in Lebanon and spent much of his productive life in the United States. He is known in the English-speaking world primarily for The Prophet, a book of twenty-six poetic essays published in 1923 which achieved cult status. He remains one of the world’s bestselling poets, second only to Shakespeare and Lao-Tzu. To many he is a genius whose philosophical and prophetic style convey important messages about life and humanity in a simple, yet beautifully eloquent manner, which was described by Library Journal as "poetic prose, half New Testament and half Walt Whitman.”