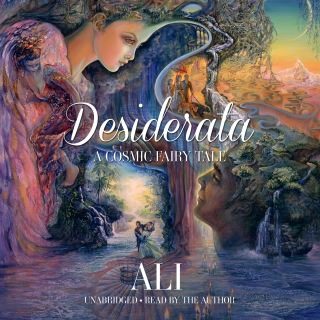 In the flowing tides of galloping quest,we have set eyes on each otherthen lost our sight,over and over, until we learnedto forget the chase.

Desiderata is a fairy tale, and epic poem, cosmic in its scope. It is the tale of two lovers who are cast out of their ideal realm by a jealous sorcerer. Born into our world, the man searches timelessly for his love in the many forms of the goddess—from mother to heartthrob to seductress and finally, in mature wisdom, immortal beloved. As the two lovers conclude their journey through the limitation of earth, their revelations free them from this plane, to reclaim their eternal kingdom.

You and I, ever one,through the world without end.

Sean Christopher Ali Stone has been a spiritual seeker all his life, studying meditation and global religious traditions since his father took him to India, Nepal, and Tibet at ten years of age. A student of history at Princeton University and Oxford, he has previously written the nonfiction history book New World Order. As a media personality, he has hosted the interview program Buzzsaw on Gaia as well as the news show Watching the Hawks for RT. He has acted in films such as JFK, The Doors, Savages, and Fury of the Fist and the Golden Fleece. He is the director of films such as Greystone Park and the documentaries Fight Against Time: Oliver Stone’s Alexander; A Century of War; Hollywood, D.C.; and MetaHuman.