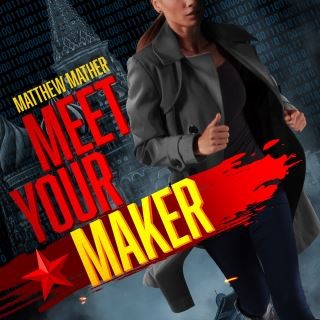 In the Czar’s Suite of Kiev’s five-star Persian Palace, police discover a body jammed impossibly deep in a narrow ventilation duct. Security cameras reveal that no one else entered the supersecure room.

An ocean away, Interpol rookie Delta Devlin witnesses an attempted assassination, but the bullet meant for the Ukrainian prime minister hits her father instead, lodging next to his heart. Investigations reveal that ex–KGB operator Yuri Korshunov smuggled a 3D-printed plastic gun into the UN Building.

As her father falls into a mysterious coma, Devlin tracks down infamous tech wunderkind Lenny Bondar at the Maker Faire, a global gathering of hackers. Desperate, she follows Korshunov and Bondar into the underworld of Eastern Europe. There, her worst nightmares materialize from the darkness. Something is coming for her, and it may not even be alive.

With Russian troops massed on the borders, and her father on the brink of death, Del follows a trail of bizarre murders ever deeper into no-man’s-land. But can she uncover the truth and save her father before a new kind of war forever alters the world?

Matthew Mather’s books have sold millions of copies, been translated and published in over twenty-five countries, and optioned for multiple movie and television contracts. After starting his career at the McGill Center for Intelligent Machines, Matthew worked in ventures ranging from nanotechnology to cybersecurity before becoming a full-time author of high-concept speculative thrillers.