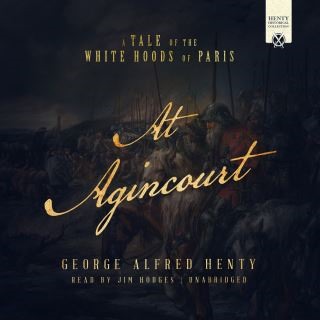 A Tale of the White Hoods of Paris

G.A. Henty novels are highly researched as well as drawn from his first-hand experiences of people, places, and events. From 1413-1415 the butcher’s guild, otherwise known as the “White Hoods” of Paris, kept that city in a state of near anarchy. With a mad king, a virtual civil war between the houses of Orleans and Burgundy, and King Henry V of England claiming the French throne, there is plenty of opportunity for Guy Aylmer, a squire to Sir Eustace de Villeroy, to show his mettle in many a skirmish, finally winning his spurs at the lopsided victory of the English over the French at the Battle of Agincourt on October 25, 1415.

George Alfred Henty (1832–1902) was born in Trumpington, England. He studied at Cambridge but left without his degree to volunteer for service in the Crimean War. After several failed attempts at careers, he decided in 1865 to become a writer, beginning as a correspondent for the Standard. He wrote his first boys’ adventure, Out of the Pampas, in 1868, and its popularity spurred him to write some eighty more children’s books. Drawing on his own experiences fighting in the Crimean War and as a foreign correspondent in Europe and Africa, Henty fashioned stories for children that combined realism and what he called a “manly tone.” His novels encompass an array of times and places from the early days of Egypt to the mines of the California Gold Rush. He died in 1906, having left a legacy of 144 books and several short stories.