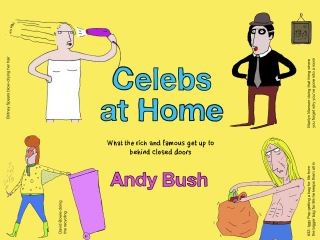 ‘Bush can literally draw anything. I’ve watched him draw a stick of celery with enough finesse and detail to make a botanist weep. And then, in the next breath, he drew Rick Astley’s hair. Brilliantly.’ Mel Giedroyc

What do celebrities get up to when they’re at home and away from the glare of the public eye? Between playing songs on Absolute Radio, Andy Bush always wondered about the mundane, boring stuff famous people must do, just like you and I, and he created illustrations of his musings. For the first time, the very best of Andy’s illustrations are compiled together into an essential guide that attempts to answer such important questions as:

––Does Elton John sometimes lose his remote down the back of the sofa?
––Do Kraftwerk put the bins out together?
––And does Lady Gaga’s snack ever get stuck in the vending machine?

Andy Bush: Andy Bush is a broadcaster, illustrator and writer who presents the afternoon show on Absolute Radio and a weekend show with Mel Giedroyc on Magic. Bush was raised in Bristol and spent ten years presenting the number one commercial radio show in the West Country. He writes and draws for the Huffington Post. @bushontheradio