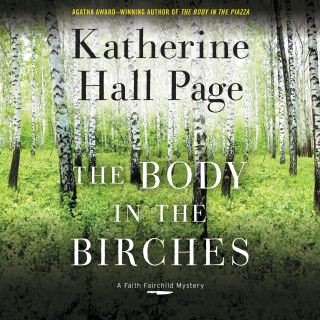 The Body in the Birches

The Fourth of July is one of the hottest on record and even the breeze off Penobscot Bay can’t seem to cool things down for Faith Fairchild and the rest of the folks on Sanpere Island. But the fireworks are just beginning. After the celebrations are over, Faith discovers a body in the woods near The Birches, an early twentieth-century &#8220cottage.”

The body is identified as The Birches’ housekeeper, who seems to have succumbed to a heart attack. The death is only one of the dramatic events upending the historic house. A family gathering has been called to decide who will inherit the much loved, and very valuable, estate that has been in the Proctor family for generations. With this much money involved, it’s just a matter of time before trouble arises.

Faith is juggling her own family problems. Her teenage son, Ben, has started a new job as a dishwasher at The Laughing Gull Lodge—learning things that could land him in very hot water. And her daughter Amy is worried about her new friend, Daisy Proctor. Daisy is terrified—convinced that someone is trying to eliminate her mother from getting a share of The Birches. To protect her children, Faith has to find a possible murderer—before he strikes too close to her own home.

Katherine Hall Page is the author of twenty-three previous Faith Fairchild mysteries, the first of which received the Agatha Award for best first mystery. The Body in the Snowdrift was honored with the Agatha Award for best novel of 2006. Page also won an Agatha for her short story “The Would-Be Widower.” The recipient of the Malice Domestic Award for Lifetime Achievement, she has been nominated for the Edgar, the Mary Higgins Clark, the Maine Literary, and the Macavity Awards. She lives in Massachusetts and Maine with her husband.