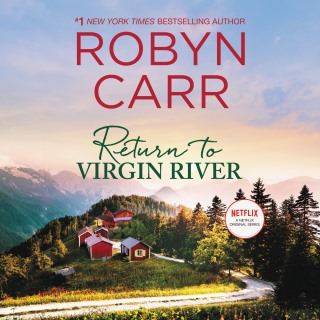 Kaylee Sloan’s home in Southern California is full of wonderful memories of the woman who raised her. But the memories are prolonging her grief over her mother’s recent death. A successful author, Kaylee hoped she could pour herself into her work. Instead she has terrible writer’s block and a looming deadline.

Determined to escape distractions and avoid the holiday season, Kaylee borrows a cabin in Virgin River. She knows the isolation will help her writing, and as she drives north through the mountains and the majestic redwoods, she immediately feels inspired. Until she arrives at a building that has just gone up in flames. Devastated, she heads to Jack’s Bar to plan her next steps. The local watering hole is the heart of the town, and once she crosses the threshold, she’s surprised to be embraced by people who are more than willing to help a friend—or a stranger—in need.

Kaylee’s world is expanding in ways she never dreamed possible. And when she rescues a kitten followed by a dog with a litter of puppies, she finds her heart opening up to the animals who need her. And then there’s the dog trainer who knows exactly how to help her. As the holidays approach, Kaylee’s dread turns to wonder. Because there’s no better place to spend Christmas than Virgin River.