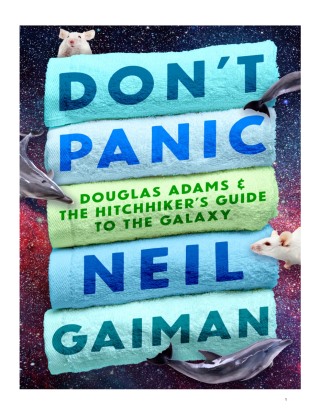 Douglas Adams and the Hitchhiker's Guide to the Galaxy

Now in audiobook for the first time ever! Read by Simon Jones, the original “Arthur Dent,” and written by #1 New York Times bestselling author Neil Gaiman, Don’t Panic is the definitive chronicle of all things Hitchhiker!

First published in 1986 and updated several times since, Don’t Panic is in an in-depth exploration of Douglas Adams’s cultural phenomenon The Hitchhiker’s Guide to the Galaxy – from its beginnings as a UK radio series, to its expansion into a wildly popular book trilogy, and onto incarnations in various media including stage, records, film, computer games, and even, um, tea towels. Don’t Panic was the first book by internationally bestselling author Neil Gaiman, written early in his writing career when he worked as a freelance journalist in his native England. Voiced by renowned actor Simon Jones – “Arthur Dent” himself – and with a new introduction written and read by Neil Gaiman, Don’t Panic: Douglas Adams & The Hitchhiker’s Guide to the Galaxy audio edition is the ultimate version of this beloved work.

Neil Gaiman is the #1 New York Times bestselling author of more than twenty books, including Norse Mythology, Neverwhere, and The Graveyard Book. Among his numerous literary awards are the Newbery and Carnegie medals, and the Hugo, Nebula, World Fantasy, and Will Eisner awards. Originally from England, he now lives in America.