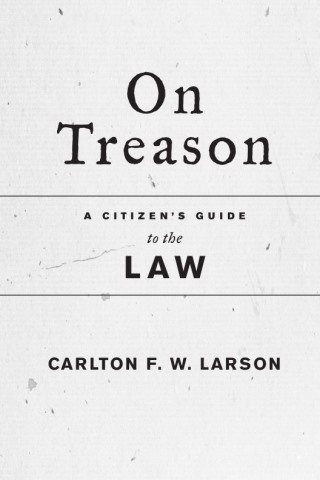 A Citizen's Guide to the Law

A concise, accessible, and engaging guide to the law of treason, written by the nation’s foremost expert on the subject

The only crime defined in the United States Constitution, treason is routinely described by judges as more heinous than murder. Today the term is regularly thrown around by lawmakers and pundits on both sides of the aisle. But as these heated accusations flood the news cycle, it’s not always clear what the crime of treason truly is, or when it should be prosecuted.

Drawing on over two decades of research, constitutional law and legal history scholar Carlton Larson takes us on a grand tour of the Treason Clause of the United States Constitution. Despite the Clause’s apparent simplicity, Larson demonstrates that it is a form of constitutional quicksand in which seemingly obvious intuitions are often far off the mark. From the floors of the medieval British Parliament that codified the Statute of Treasons upon which the American law was based to the treason of Benedict Arnold, our nation’s founding traitor, to more recent events, including WWII’s “Tokyo Rose” and the allegations against Edward Snowden and Donald Trump, Larson provides a riveting account of treason law in action.

On Treason is an indispensable guide for anyone who wants to understand this fundamental aspect of our legal system. With this short, accessible look at the law’s history and meaning, Larson clarifies who is actually guilty—and readers won’t need a law degree to understand why.

Carlton F.W. Larson is a Martin Luther King, Jr. Professor of Law at the University of California, Davis, School of Law, where he teaches American constitutional law and English and American legal history. A graduate of Harvard College and Yale Law School, Larson is one of the nation’s leading authorities on the law of treason. His scholarship has been cited by numerous federal and state courts, and has been highlighted in the New York Times and many other publications.  He is a frequent commentator for the national media on constitutional law issues and is the author of the book The Trials of Allegiance: Treason, Juries, and the American Revolution (Oxford University Press, 2019).