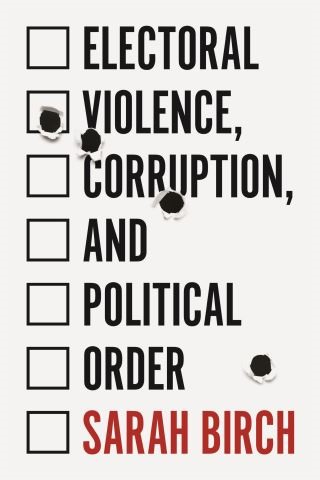 Throughout their history, political elections have been threatened by conflict, and the use of force has in the past several decades been an integral part of electoral processes in a significant number of contemporary states. However, the study of elections has yet to produce a comprehensive account of electoral violence. Drawing on cross-national data sets together with fourteen detailed case studies from around the world, Electoral Violence, Corruption, and Political Order offers a global comparative analysis of violent electoral practices since the Second World War.

Sarah Birch shows that the way power is structured in society largely explains why elections are at risk of violence in some contexts but not in others. Countries with high levels of corruption and weak democratic institutions are especially vulnerable to disruptions of electoral peace. She examines how corrupt actors use violence to back up other forms of electoral manipulation, including vote buying and ballot stuffing. In addition to investigating why electoral violence takes place, Birch considers what can be done to prevent it in the future, arguing that electoral authority and the quality of electoral governance are more important than the formal design of electoral institutions.

Delving into a deeply influential aspect of political malpractice, Electoral Violence, Corruption, and Political Order explores the circumstances in which individuals choose to employ violence as an electoral strategy.

Sarah Birch: Sarah Birch is professor of political science in the Department of Political Economy at King’s College London. Her books include Electoral Malpractice and Full Participation.