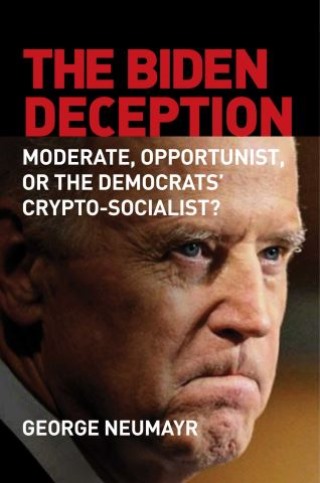 Moderate, Opportunist, or the Democrats' Crypto-Socialist?

A Socialist in Sheep's Clothing

That's what Joe Biden is.

"Ordinary Joe" bills himself as a unifying "moderate," but he's far more dangerous than many realize. In fact, he's on board with the extreme Left on every vital issue—from the "Green New Deal," to trampling on the constitutional rights of gun owners and Christians, to socialist schemes that threaten to turn the United States into Venezuela.

George Neumayr, a savvy and seasoned reporter, exposes Biden's radicalism and proves—often with the candidate's own words—why his presidency would be a disaster for America.

In The Biden Deception, you’ll learn how and why a Biden administration would:

All elections are important, but 2020 will determine whether the U.S. becomes a socialist state—modeled on “lockdown America”—or renews its commitment to freedom and capitalism. Read The Biden Deception and don’t be fooled.

George Neumayr: GEORGE NEUMAYR is author of The Political Pope and co-author of No Higher Power: Obama's War on Religious Freedom. He is a senior editor for (and former executive editor of) The American Spectator. He was op-ed editor for Investor's Business Daily and has written on politics and religion for many publications, including The Washington Times, The Daily Caller, National Review Online, Human Events, The Washington Examiner, The Hill, and The Guardian. He is the former editor of Catholic World Report and a former media fellow at Stanford's Hoover Institution.