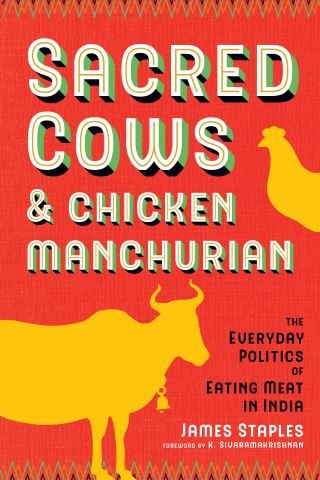 The Everyday Politics of Eating Meat in India

Bovine politics exposes fault lines within contemporary Indian society, where eating beef is simultaneously a violation of sacred taboos, an expression of marginalized identities, and a route to cosmopolitan sophistication. The recent rise of Hindu nationalism has further polarized traditional views: Dalits, Muslims, and Christians protest threats to their beef-eating heritage while Hindu fundamentalists rally against those who eat the sacred cow. Yet close observation of what people do and do not eat, the styles and contexts within which they do so, and the disparities between rhetoric and everyday action overturns this simplistic binary opposition.

Understanding how a food can be implicated in riots, vigilante attacks, and even murders demands that we look beyond immediate politics to wider contexts. Drawing on decades of ethnographic research in South India, James Staples charts how cattle owners, brokers, butchers, cooks, and occasional beef eaters navigate the contemporary political and cultural climate. Sacred Cows and Chicken Manchurian offers a fine-grained exploration of the current situation, locating it within the wider anthropology of food and eating in the region and revealing critical aspects of what it is to be Indian in the early twenty-first century.

James Staples is reader in social anthropology at Brunel University London and author of Leprosy and a Life in South India: Journeys with a Tamil Brahmin and Peculiar People, Amazing Lives: Leprosy, Social Exclusion and Community Making in South India.