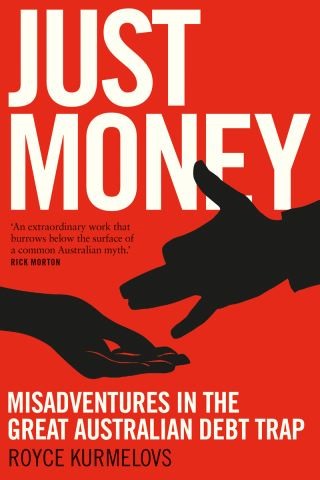 The debt business is booming. Now more than ever millions of Australians are grappling with credit card, mortgage and student-debt repayments. As the result of a car crash without insurance, investigative journalist Royce Kurmelovs finds himself among them. When a debt collector knocks on his door, he embarks on a journey through the underbelly of the Australian financial system. Though friends tell him not to worry &#8211; that it's &#8216;just money' &#8211; he learns the opposite is true: our relationship with debt is a convergence of class and power, making it an urgent social justice issue for a growing number of people. Just Money is a timely and important book that reveals how years of political opportunism and rapacious business practices in the &#8216;Lucky Country' have forged a nation that is leaving the next generation to pick up the tab.

Royce Kurmelovs: Royce Kurmelovs is an award-winning journalist whose work has been published by the ABC, CNN, BBC, Al-Jazeera English, VICE, The Guardian and elsewhere. He is the author of the bestselling and critically acclaimed books The Death of Holden, Rogue Nation and Boom and Bust.