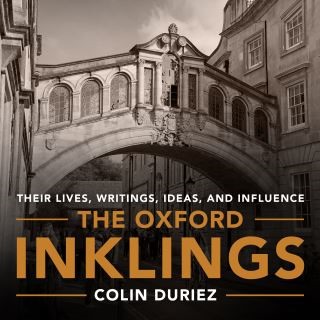 Lewis, Tolkien and Their Circle

The Oxford Inklings tells the story of the friendships, mutual influence, and common purpose of the Inklings - the literary circle which congregated around C.S. Lewis and J.R.R. Tolkien. Meeting in pubs or Lewis's college rooms, they included an influential array of literary figures. They were, claimed poet and novelist John Wain, bent on 'the task of redirecting the whole current of contemporary art and life'. Tolkien and Lewis expert Colin Duriez unpacks the Inklings' origins, relationships, and the nature of their collaboration. He shows how they influenced, encouraged, and moulded each other. Duriez also covers the less celebrated Inklings, neglected, he claims, for too long. What did they owe - and offer - to the more acknowledged names? What brought them together? And what, eventually, drove them apart from their initial focus upon each other's writings?

Colin Duriez: Colin Duriez is an expert on C.S. Lewis, his writings and also his wider circle. He is also the author of the popular biography C.S. Lewis: A biography of friendship and J.R.R. Tolkien: The Making of a Legend (both published by Lion Hudson). He has also written widely on other aspects of Lewis, Tolkien and the other members of the Inklings, and has contributed to conferences, lectures, DVDs and documentaries on these subjects.