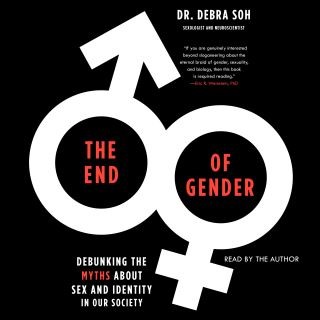 The End of Gender

Debunking the Myths about Sex and Identity in Our Society

International sex researcher, neuroscientist, and columnist Debra Soh debunks popular gender myths in this scientific examination of the many facets of gender identity that “is not only eminently reasonable and beautifully-written, it is brave and vital” (Ben Shapiro, #1 New York Times bestselling author).

Is our gender something we’re born with, or are we conditioned by society? In The End of Gender, neuroscientist and sexologist Dr. Debra Soh uses a research-based approach to address this hot-button topic, unmasking popular misconceptions about the nature vs. nurture debate and exploring what it means to be a woman or a man in today’s society.

Both scientific and objective, and drawing on original research and carefully conducted interviews, Soh tackles a wide range of issues, such as gender-neutral parenting, gender dysphoric children, and the neuroscience of being transgender. She debates today’s accepted notion that gender is a social construct and a spectrum, and challenges the idea that there is no difference between how male and female brains operate.

The End of Gender is conversation-starting “required reading” (Eric R. Weinstein, PhD, host of The Portal) that will arm you with the facts you need to come to your own conclusions about gender identity and its place in the world today.

Debra Soh: Dr. Debra Soh is a neuroscientist who specializes in gender, sex, and sexual orientation. She received her doctorate from York University in Toronto and worked as an academic researcher for eleven years. Her writing has appeared in The Globe and Mail (Toronto), Harper’s Magazine, The Wall Street Journal, the Los Angeles Times, Scientific American, Playboy, Quillette, and many other publications. Her research has been published in academic journals including the Archives of Sexual Behavior and Frontiers in Human Neuroscience. As a journalist, Soh writes about the science and politics of human sexuality and gender, free speech, and censorship in academia. She lives in Toronto. Follow her on Twitter at @DrDebraSoh and visit her at DrDebraSoh.com.