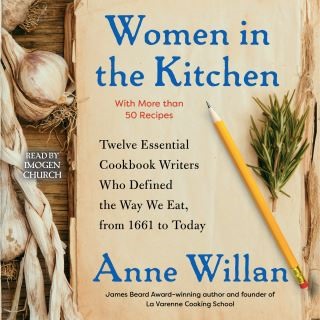 Women in the Kitchen

Twelve Essential Cookbook Writers Who Defined the Way We Eat, from 1661 to Today

Anne Willan, multi-award-winning culinary historian, cookbook writer, cooking teacher, and founder of La Varenne Cooking School in Paris, explores the lives and work of women cookbook authors whose important books have defined cooking over the past three hundred years. Beginning with the first published cookbook by Hannah Woolley in 1661, up to Alice Waters today, these women, and books, created the canon of the American table.

Focusing on the figures behind the recipes, Women in the Kitchen traces the development of American home cooking from the first, early colonial days to transformative cookbooks by Fannie Farmer, Irma Rombauer, Julia Child, Edna Lewis, and Marcella Hazan. Willan offers a short biography of each influential woman, including her background, and a description of the seminal books she authored. These women inspired one another, and in part owe their places in cooking history to those who came before them.

Anne Willan: Anne Willan founded La Varenne Cooking School in Paris in 1975 and has written more than thirty books, including the double James Beard Award­–winning, The Country Cooking of France, the Gourmand Award­–winning The Cookbook Library, and the groundbreaking La Varenne Pratique, as well as the Look & Cook series, showcased on PBS. In 2013, she was inducted into the James Beard Foundation Awards Hall of Fame. Willan serves as an Emeritus Advisor for The Julia Child Foundation for Gastronomy and the Culinary Arts. She divides her time between London and the south of France.