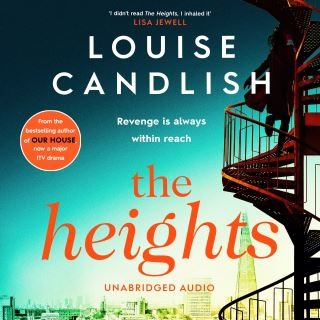 FROM THE BESTSELLING AUTHOR OF OUR HOUSE, WINNER OF THE CRIME & THRILLER BOOK OF THE YEAR AWARD, COMES A NAIL-BITING STORY OF REVENGE, OBSESSION AND VERTIGO.

He thinks he’s safe up there. But he’ll never be safe from you.

The Heights is a tall, slender apartment building among the warehouses of Tower Bridge, its roof terrace so discreet you wouldn’t know it existed if you weren't standing at the window of the flat directly opposite. But you are. And that’s when you see a man up there – a man you’d recognize anywhere. He’s older now and his appearance has subtly changed, but it’s definitely him.

Which makes no sense at all since you know he has been dead for over two years.  You know this for a fact.

Because you’re the one who killed him.

'The Heights has everything you could possibly wish for - tragedy, obsession, revenge and, yes, love. Another finely-crafted masterpiece from Louise Candlish' BA Paris

'There’s nothing quite so chilling as the roar of mother tiger love. Louise Candlish had my heart in my throat. Dizzily dark. Dangerous. Deadly' Jane Corry

'No one creates middle-class characters we love to hate quite like Louise Candlish. I’d expected her to do this, and to provide a great sense of place, and twists that would have been rifling through the book to see how they’d been done. What I wasn’t expecting was that this thriller of obsessive revenge and intense parental grief would tug at my heartstrings. Smart, addictive, twisting, surprising. Highly recommended' Sarah Vaughan

‘Tense, provocative and devastatingly powerful. I loved Our House but I think The Heights might be even better’ TM Logan

'It twists and it turns and it twists again. The Heights by Louise Candlish is the very definition of a “just one more chapter” novel. I devoured it. And it’s full of such great writing about the ferocity of maternal love' Hannah Beckerman

Louise Candlish: Louise Candlish is the Sunday Times (London) bestselling author of fourteen novels. Our House, a #1 bestseller, won the Crime & Thriller Book of the Year at the 2019 British Book Awards, was longlisted for the 2019 Theakston Old Peculier Crime Novel of the Year, and was shortlisted for the Goldsboro Books Glass Bell Award. It is now in development for a major TV series with Red Planet Pictures, producers of Death in Paradise. Louise lives in London with her husband and daughter. Visit her at LouiseCandlish.com or connect with her on Twitter @Louise_Candlish.