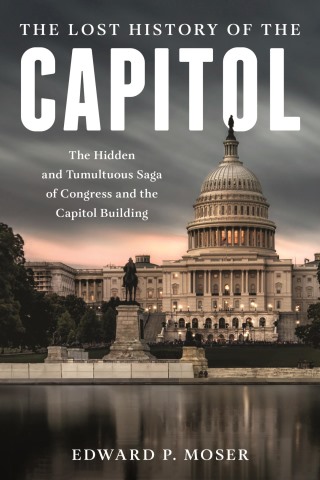 The Lost History of the Capitol

The Hidden and Tumultuous Saga of Congress and the Capitol Building

The Lost History of the Capitol is an account of the many bizarre, tragic, and violent episodes that have occurred in and around the Capitol Building, from the founding of the federal capital city in 1790 up to contemporary times, including the events of January 6, 2021. In this 230-year span, the Senate, the House of Representatives, and the neighborhoods nearby have witnessed dozens of high-profile scandals, trials, riots, bombings, and personal assaults, along with not a few significant achievements. It is a popular work about the U.S. Capitol Building and its environs.

Edward P. Moser: Edward Moser is a historian, tour guide, and author. A former speechwriter for President George H.W. Bush, and a former Editor of Time-Life Books, he was also a writer for “The Tonight Show with Jay Leno.” He is the author, co-author, or editor of books on such subjects as history, politics, humor, and science. He also runs a popular tour of the White House and Lafayette Square areas of Washington, D.C. His M.A. in foreign affairs is from George Washington University in D.C., and his B.A. in history is from the State University of New York at Albany. Hailing from The Bronx, and an avid cyclist and traveler, he resides in Alexandria, Virginia.