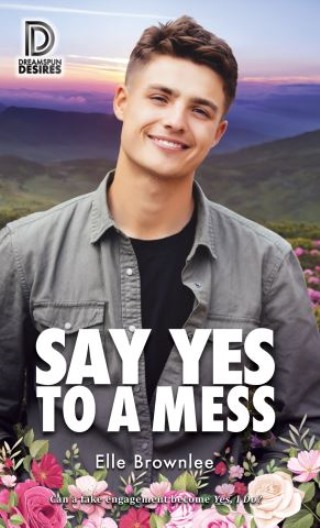 Say Yes to a Mess

Can a fake engagement become a real marriage?

Wiley Grey is stuck in a rut. He loves his picturesque hometown, helping in his best friend’s bakery, and the house his grandmother left him. But something’s missing.

Holt Leydon never intended to become a reality TV show host. When his flamboyant brother, Kit, needed a handyman on the set of I Do!, Holt fell into the role, using his expertise to make Kit’s wildest wedding designs come true. Now he’s ready to move on. Kit has agreed on one condition: they rescue Kit’s would-be ratings bonanza “coming home” episode by making Holt the groom.

The problem is Holt needs someone to marry, and fast. Something compels him to ask childhood friend Wiley—and Wiley agrees to the pretense.

Kit gets his dramatic last episode, Holt gets off the show, and Wiley gets some artificial excitement and a “honeymoon” on the show’s dime. It’s perfect—until the grooms start wishing their pretend engagement was more reality and less TV….