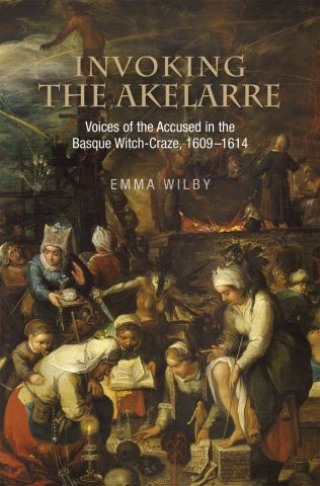 With their dramatic descriptions of black masses and cannibalistic feasts, the records generated by the Basque witch-craze of 1609&ndash;14 provide us with arguably the most demonologically-stereotypical accounts of the witches' sabbath—or akelarre—to have emerged from early modern Europe. While the trials have attracted scholarly attention, the most substantial monograph on the subject was written nearly forty years ago and most works have focused on the ways in which interrogators shaped the pattern of prosecutions and the testimonies of defendants. Invoking the Akelarre diverts from this norm by employing more recent historiographical paradigms to analyze the contributions of the accused. Through interdisciplinary analyses of both French- and Spanish-Basque records, it argues that suspects were not passive recipients of elite demonological stereotypes but animated these received templates with their own belief and experience, from the dark exoticism of magical conjuration, liturgical cursing and theatrical misrule to the sharp pragmatism of domestic medical practice and everyday religious observance. In highlighting the range of raw materials available to the suspects, the book helps us to understand how the fiction of the witches' sabbath emerged to such prominence in contemporary mentalities, whilst also restoring some agency to the defendants and nuancing the historical thesis that stereotypical content points to interrogatorial opinion and folkloric content to the voices of the accused. In its local context, this study provides an intimate portrait of peasant communities as they flourished in the Basque region in this period and leaves us with the irony that Europe's most sensationally-demonological accounts of the witches' sabbath may have evolved out of a particularly ardent commitment, on the part of ordinary Basques, to the social and devotional structures of popular Catholicism.

Emma Wilby: Emma Wilby is an Honorary Fellow in History at the University of Exeter. Her Cunning Folk and Familiar Spirits: Shamanistic Visionary Traditions in Early Modern British Witchcraft and Magic, and The Visions of Isobel Gowdie: Magic, Witchcraft and Dark Shamanism in Seventeenth-Century Scotland, were extensively reviewed and are excerpted on the press website.