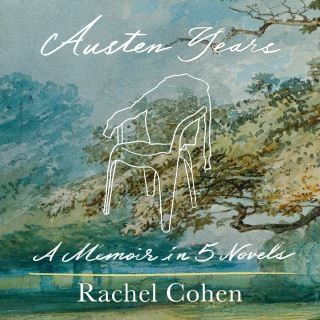 A Memoir in Five Novels

"Narrator Justine Eyre meets all the challenges of author Rachel Cohen's unique memoir, which recounts her deep reading of Jane Austen's novels...Listeners do not need to be Austen aficionados to relate to this well-told personal journey." -- AudioFile Magazine

This program includes a letter read by the author.

An astonishingly nuanced reading of Jane Austen that yields a rare understanding of how to live.

"About seven years ago, not too long before our daughter was born, and a year before my father died, Jane Austen became my only author."

In the turbulent period around the birth of her first child and the death of her father, Rachel Cohen turned to Jane Austen to make sense of her new reality. For Cohen, simultaneously grief-stricken and buoyed by the birth of her daughter, reading Austen became her refuge and her ballast. She was able to reckon with difficult questions about mourning, memorializing, living in a household, paying attention to the world, reading, writing, and imagining through Austen’s novels.

Austen Years is a deeply felt and sensitive examination of a writer’s relationship to reading, and to her own family, winding together memoir, criticism, and biographical and historical material about Austen herself. And like the sequence of Austen’s novels, the scope of Austen Years widens successively, with each chapter following one of Austen's novels. We begin with Cohen in Cambridge, Massachusetts, where she raises her small children and contemplates her father’s last letter, a moment paired with the grief of Sense and Sensibility and the social bonds of Pride and Prejudice. Later, moving with her family to Chicago, Cohen grapples with her growing children, teaching, and her father’s legacy, all refracted through the denser, more complex Mansfield Park and Emma.

With unusual depth and fresh insight into Austen’s life and literature, and guided by Austen’s mournful and hopeful final novel, Persuasion, Rachel Cohen’s Austen Years is a rare memoir of mourning and transcendence, a love letter to a literary master, and a powerful consideration of the odd process that merges our interior experiences with the world at large.

A Macmillan Audio production from Farrar, Straus and Giroux

"An absolutely fascinating book: I will never read Austen the same way again." —Helen Macdonald, author of H is for Hawk

"Exhilarating and beautiful." --Claire Messud, author of The Burning Girl

Rachel Cohen: Rachel Cohen is the author of A Chance Meeting: Intertwined Lives of American Writers and Artists, which won the PEN/Jerard Fund Award and was a finalist for the Guardian First Book Prize, and Bernard Berenson: A Life in the Picture Trade, which was longlisted for the JQ Wingate Literary Prize. Her essays have appeared in The New Yorker, The New York Times, The Guardian, The London Review of Books, The Believer, and elsewhere. She is the recipient of fellowships from the Guggenheim Foundation, the MacDowell Colony, and the New York Foundation for the Arts, and teaches in the Creative Writing Program at the University of Chicago.