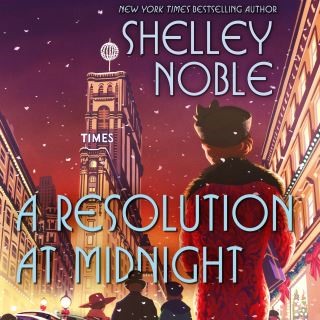 A Resolution at Midnight

Roasted chestnuts from vendor’s carts, fresh cut spruce trees lining the sidewalks, extravagant gifts, opulent dinners, carols at St Patrick’s Cathedral, a warm meal and a few minutes shelter from the cold at one of the charitable food lines . . .

And for the first time ever an amazing giant ball will drop along a rod on the roof of the New York Times building to ring in the New Year. Everyone plans to attend the event.

But the murder of a prominent newsman hits a little too close to home. And when a young newspaper woman, a protégé of the great Jacob Riis and old Vassar school chum of Bev’s, is the target of a similar attack, it is clear this is not just a single act of violence but a conspiracy of malicious proportions. Really, you’d think murderers would take a holiday.

Something absolutely must be done. And Lady Dunbridge is happy to oblige in A Resolution at Midnight, the third book in this best selling series.

Shelley Noble: SHELLEY NOBLE is the New York Times bestselling author of Beach Colors, as well as Lighthouse Beach, The Beach at Painter’s Cove, Whisper Beach, Stargazey Point, and Breakwater Bay. A former professional dancer and choreographer, she worked on the films Mona Lisa Smile and The Game Plan. She has also published a series of cozies and the Lady Dunbridge historical mysteries, the first of which was a finalist for both the RITA and Macavity Awards for historical fiction. Shelley is a member of Sisters-in-Crime, Mystery Writers of America, Romance Writers of America, and Liberty States Fiction Writers. Noble lives in New Jersey.