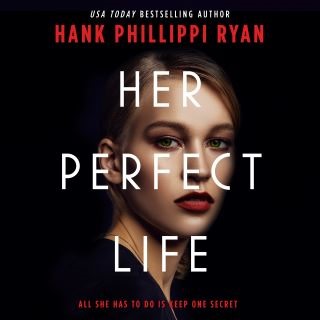 Everyone knows Lily Atwood—and that may be her biggest problem. The beloved television reporter has it all—fame, fortune, Emmys, an adorable seven-year-old daughter, and the hashtag her loving fans created: PerfectLily. To keep it all she has to do is protect one life-changing secret.

Lily has an anonymous source who feeds her story tips—but suddenly, the source begins telling Lily inside information about her own life. How does he—or she—know the truth?

Lily understands that no one reveals a secret unless they have a reason. Now she’s terrified someone is determined to destroy her world—and with it, everyone and everything she holds dear.

How much will she risk to keep her perfect life?

Hank Phillippi Ryan: USA Today bestselling author HANK PHILLIPPI RYAN has won five Agatha Awards in addition to Anthony, Macavity, Daphne du Maurier, and Mary Higgins Clark Awards. As on-air investigative reporter for Boston's WHDH-TV, she's won 37 Emmys and many more journalism honors, and her work has resulted in new laws, criminals sent to prison, homes saved from foreclosure, and millions of dollars in restitution for victims and consumers. A past president of National Sisters in Crime and founder of MWA University, her novels include Trust Me, The Murder List, the Charlotte McNally series (starting with Prime Time), and the Jane Ryland series (which begins with The Other Woman). Ryan lives in Boston with her husband, a nationally renowned civil rights and criminal defense attorney.