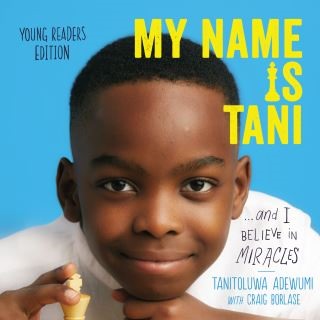 My Name Is Tani . . . and I Believe in Miracles Young Readers Edition

At eight years old, Tani Adewumi, a refugee, won the 2019 New York State Chess Championship after playing the game for only a year--and while homeless.

Tani and his family fled Boko Haram's reign of terror in Nigeria to come to the United States, where they lived in a New York City homeless shelter while waiting to be granted religious asylum. Tani began attending a public elementary school and decided he wanted to join the chess program, but it required a fee. Tani's mother reached out to the coach, who offered Tani a scholarship--and a year later the young immigrant became a chess champion.

Ideal for listeners 8 to 12 years old, this adaptation presents compelling insight into:

Tani Adewumi is the eight-year-old Nigerian-born boy who recently won the NY State Chess Championship after playing the game for only a year. Tani and his family’s story begins amidst Boko Haram’s reign of terror in their native country of Nigeria and takes them to a New York City homeless shelter, where they waited to be granted religious asylum. Tani’s father, who came from a royal Nigerian family, became a dishwasher and Uber driver to support his family. His mother, whose family owned the largest printing press in Nigeria and had been working at a bank for over a decade, trained to become a home-aid. So, when Tani asked to join the chess program at PS 116, which required a fee, it seemed unlikely. His mother wrote to the coach, who offered Tani a scholarship. Miracles led Tani and his family to New York. As Tani’s father puts it, “There are many times in my life where I thought this must be the miracle and yet, I did not know that the miracle had not yet begun.”