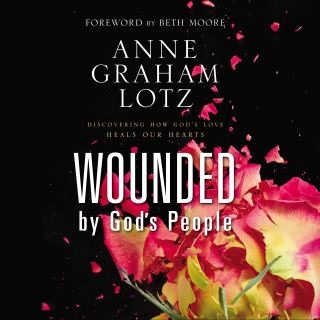 Tucked into Abraham's biography is the story of Hagar, a young Egyptian slave with whom Abraham had a son named Ishmael. Hagar stood out because she was wounded--not physically, but in ways that were as emotionally and spiritually painful as any injury to a body would be. Some wounds were provoked by her own bad behavior, but others were inflicted by those who considered themselves God's people.

Anne Graham Lotz too has been wounded by God's people. Some wounds have been deeper than others, some have come out of nowhere, and still others have been provoked by her own behavior, but all of the wounds have been deeply painful. They seemed to hurt even more when the wounders wrapped their behavior in a semblance of religion or piety.

Many have had similar experiences. And perhaps you are among those who have been so deeply hurt that you have confused God's imperfect people with God. Maybe you have even run away from God as a result. Or perhaps you have been a wounder to the extent that you are living in a self-imposed exile, believing you are unworthy to be restored to a warm, loving relationship with God or with God's people. Whatever your hurts may be, Wounded by God's People helps you to begin a healing journey--one that enables you to reclaim the joy of God's presence and all the blessings God has for you.

Called “the best preacher in the family” by her late father, Billy Graham, Anne Graham Lotz speaks around the globe with the wisdom and authority of years spent studying God's Word. The New York Times named Anne one of the five most influential evangelists of her generation. Her Just Give Me Jesus revivals have been held in more than 30 cities in 12 different countries to hundreds of thousands of attendees. Anne is a best-selling and award-winning author of 18 books. She is the President of AnGeL Ministries in Raleigh, North Carolina, and she served as Chairman of the National Day of Prayer Task Force from 2016-2017. Whether a delegate to Davos’s Economic Forum, a commentator to the Washington Post, or a groundbreaking speaker on platforms throughout the world, Anne’s aim is clear--to bring revival to the hearts of God’s people. And her message is consistent--calling people into a personal relationship with God through His Word.