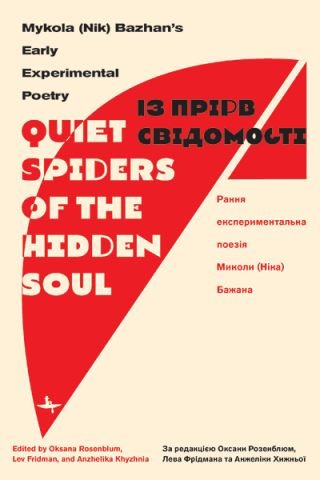 “Quiet Spiders of the Hidden Soul”

Mykola Bazhan (1904–1983), one of the most important representatives of Ukrainian literary renaissance of the 1920s, was born into an educated family of Polish-Lithuanian roots in Kamyanets’-Podil’s’kyi in Ukraine. Bazhan emerged as a futurist; however, in the 1920s and early 1930s he embraced romantic Expressionism, with frequent references to the turbulence of Ukrainian history. During his extensive career spanning some six decades, Bazhan was prolific as a poet, literary critic, translator, editor, art collector, and a political and cultural figure. Despite the fact that Bazhan not only survived the purges but eventually became an influential political figure, his early works continued to be repressed until the early 1990s.

Oksana Rosenblum is an art historian and translator residing in New York City. Her projects have included visual research for the newly created museums of Jewish History in Warsaw and Moscow. Oksana’s poetry translations from Ukrainian and book reviews appeared in Kalyna Review, National Translation Month, and Versopolis.

Lev Fridman is a Speech-Language Pathologist based in New York City. He has facilitated translation projects and publications, and his own writings and translations have appeared in Ugly Duckling Press, Odessa Review, and The Café Review. His most recent research has focused on the literary legacy of Mykola Bazhan.

Anzhelika Khyzhnya is a scholar and journalist. She holds an MA in Slavic Languages and Literature, and is a PhD candidate at the University of California, Berkeley. Her research interests include linguistic aspects of early 19th century Russian and Ukrainian prose, Ukrainian poetry of the 1920s, and the relationship between literature and the visual arts.